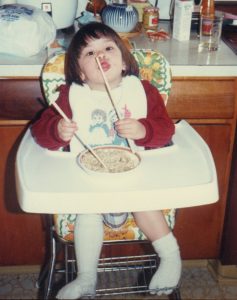 Food has been an important part of my life for as long as I can remember. If only someone had taught mini-me how to use chopsticks, eating noodles would have been a lot easier.

I always feel like these “about me” sections are the written equivalent of the little speech that I’d give at one of those “anonymous” meetings. If they had a gluten anonymous meeting, I’d likely be the local chairwoman.

Hi, I’m Jen, a forty year old yogi who dabbles in running, an animal lover, traveller, photographer, creative soul, bread fiend, and a baker for life, that just so happens to be gluten free since being diagnosed with celiac disease.

My life path has been anything but straight, but I suppose I wouldn’t be who I am today if I took the straight and narrow path. I grew up in the northeast, surrounded by family, books, animals, and a lot of food. I was lucky enough to grow up with both my Portuguese and Chinese grandmothers cooking me their favorite things, and my mom who dabbled in ethnic cooking, but mostly just tried to assimilate by making American classics. Let’s just say I’m as comfortable with flan and homemade egg rolls, as I am with the insanely addictive Velveeta mac and cheese (squeezy cheese > powdered cheese!) and Hamburger Helper.

I was never really drawn to savory cooking, but baking – with its carefully measured ingredients and very specific baking times and temperatures always comforted me. As a stressed out senior in high school, I baked cookies from my mom’s tattered Betty Crocker cookbook to bring to class. When I found myself in a dark place while I was hunting for my first NYC job, I taught myself how to make real buttercream and a proper layer cake from the Joy of Cooking.

A few years into my first marketing job in NYC, I found myself drawn to turning my passion for baking into more than just a hobby. Was it possible to become a professional baker? Perhaps it was kismet that The French Culinary School was just a few blocks south of my job in SoHo. I signed up for evening classes in pastry, and after nine months of spoiling my coworkers with my evening pastry creations, I had a degree in Pastry Arts. However, I found myself stuck in the corporate arena for a bit, as we just closed on our first home and had barely a few pennies to scrape together. There was no way I could give up a decent salary and I definitely didn’t have enough money, or even know how to go about getting a loan to open up my own shop, which was my not so secret goal from the day I started culinary school.

After a few more corporate hops and a short stint in NYC’s advertising world, I had finally saved enough money to open up my own bakery, which had a great five year run. The solo entrepreneurial life was both exhilarating and exhausting. I have often said that those five years gave me a non-official MBA in life.

While no one really knows for sure, many experts say that celiac disease can be triggered by stress. I’m pretty sure that running and then closing my bakery, moving three times, buying and selling real estate in NJ/NYC, and going through three different jobs within a four year span might have contributed to my immune system going haywire.

As you might imagine, for a pastry chef, self diagnosed bread-a-holic, and a girl who ran her first half marathon as part of “Team Jelly Doughnut”, my celiac diagnosis was initially devastating. I found myself completely frustrated by all the cheerful, health-focused celiac community online, and felt really alone as I struggled to find my way back into the kitchen for solace and healing.

I’ve been told countless times that if there’s something that you want, but cannot find, then you should create it. So, here goes – A gluten-free site, sans all the typical craziness, where I’ll write about my adventures in the kitchen and beyond, as a food loving, bread loving, French-pastry trained celiac.

So what will you find here? Recipes that work, cookbook reviews, photos, travel maps, recommendations on things I love, maybe a few rants on things that make me crazy, and random musings on exactly how it feels to be a first generation Xennial woman plowing through what’s expected, longing for a change, and perhaps if I’m lucky, rebooting myself yet again.